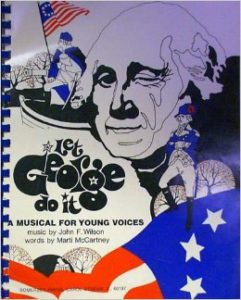 It was 40 years ago this summer (1976) when several of us kids that grew up at First Baptist Church Henderson Kentucky learned and sang the children’s musical about our country “Let George Do It“.

We did the musical all over town as a part of the 1976 bicentennial celebrations.  We were in quite demand for a bunch of children singers and actors.

“Let George Do It” is a children’s unison and two-part musical featuring George Washington and King George III.

It was so appropriate that we do it in 1976 since that was the 200th  birthday of the United States of American.`

One of the songs, G-E-O-R-G-E Washington, featured these words:

First in War, first in Peace, first in the hearts of his country men. Let George do it he is the man of the hour.

It was a whimsical musical with unison children’s parts. I guess that is one reason I enjoyed so much because – I could actually sing the soprano part and get away with it.

We learned the music early in June 1976 when we went away to camp (we called it back then Junior Music Camp). This year was particular different, since we didn’t go to Cedarmore (Baptist Camp in Bagdad KY) we went to a camp that was just us First Baptist Henderson KY kids (we were a big group). It was Camp Reveal on the north side of Evansville Indiana.

We had several highly accomplished musicians and actors with us. People like Kenny Butler and Lonnie Klein came with us as chaperones. My mom Mary Elizabeth Priest and Janie Coursey came as cooks.

Merrilyn Smith was our pianist and did accompany most of the children’s choir musicals. She really had the mojo for this particular musical, since she has an incredible flair for ragtime blues music. Of course, her daughter Shelly  had one of the singing parts too.

My grandmother Elizabeth Hancock as well as other seamstresses in the church (Alice Langston and Eleanor Eades) made some exquisite costumes for this musical. My mother kept mine for many years and loaded it out one time to and never saw it returned.

What do you remember about the FBC kids doing “Let George Do It” in 1976? Who were some of the kids that had leading roles?

Have you ever thought about opening a small retail business in downtown Henderson Kentucky?

There is a great building in downtown Henderson that is perfect for you!  The building is at 232 N Main St in beautiful historic downtown.  This building has over  1200 square feet of open space.

Over the years this space has been an insurance agency, financial adviser office, computer store, pack and ship store, antique store, a recording studio and as of late a successful bicycle shop.

The space has a new metal roof, new commercial grade red carpet and a security system.  Plenty of on street free parking.

There is nothing like having a Main Street address! If you are interested in seeing this property please email, chat or call 270.631.2121 for a private showing.

Nibby also owns the twin to the building and it is for rent at 234 N Main St.

Today at my local Toastmasters Club, I am co presenting with fellow Toastmaster Michelle Green, CC. Michelle and I will be doing a presentation talk show style, and the topic will be: Bringing Out the Inner Techie in those Near and Dear to You: A … END_OF_DOCUMENT_TOKEN_TO_BE_REPLACED

Thanksgiving day is a good day to start journaling.  A good bicycling friend got me into the habit a few years ago.“Gratitude unlocks the fullness of life. It turns what we have into enough, and more. It turns denial into acceptance, chaos to order, … END_OF_DOCUMENT_TOKEN_TO_BE_REPLACED